ITPS experts took part in the “Digital Transformation and Integrated Process Informatization Using 1C Solutions” conference, which was held on February 18, 2020 in Almetyevsk (Tatarstan). It was organized by the oil service holding company TAGRAS, which currently carries out a number of programs in its divisions aimed at transforming and improving business efficiency with the help of digital tools. The event was dedicated to international best practices, as well as holding company’s achievements in this area. ITPS experts spoke to the professional community about the unique digitalization techniques for oilfield services companies and practical experience gained during the implementation of projects for both the holding company enterprises and the entire oil and gas industry.

TAGRAS Holding is one of the industry leaders providing over 1350 types of oilfield services in 17 Russian regions. At present, it consists of 10 divisions, each of them specializing in a certain type of activity: exploration, drilling, repair and maintenance of wells, etc. The goal of digitalization is to combine the production data of all organizations into a single system, which will significantly increase the manageability of subsidiaries, efficiency and quality of the services provided.

Digital transformation is being implemented in stages and the management of the Holding is trying hard to involve the employees into this major and complex process. With that in mind, training seminars and sessions are held on a regular basis. The mentioned event went beyond the scope of the internal corporate session and was held at the republican level – with the participation of the leading mass media, representatives of the government and partner companies. “The goal of the conference is to provide more information, so that the people would know that the Holding is going along this path; that it aims for development and is ready to bring more light to digitalization and involve more participants into the process,” said Lenar Nazipov, General Director of TAGRAS Holding.

The ITPS Group of Companies has become a strategic IT partner of the Holding due to its vast expertise in the field of 1C solutions and extensive project experience in the oil and gas sector. The first large-scale project was implemented at Tatburneft Asset Management Company LLC, the drilling division of the Holding. Many applied solutions and technologies were implemented on the Russian oilfield services market for the first time. As a result, in just a year and a half, the company increased twice the number of external customers, and now it makes half of its revenue. The successful experience of the drillers was further used in the development of integrated programs for other divisions, which also embarked on the path of digital transformation.

“The activities of TAGRAS holding are inextricably linked with our key customers – oil and gas companies. Since 2010, many of them began to actively work on digitalization, launched major projects such as “Intelligent Field” at LUKOIL, “Asset of the Future” at Gazprom Neft, and “Digital Field” at Rosneft. Most projects have been implemented at the operational stage, where digital technology can produce a quick effect. However, if we consider the field development project throughout its life cycle, it becomes obvious that the main groundwork for the future efficiency is laid at the earliest stages.  It is exploration, design, construction, drilling and well construction. Mistakes at this stage are unacceptable, as they can make it impossible to get back to the correct path. The value of companies such as TAGRAS lies in the fact that they are the first to come to the field, the first to collect data. The success of the investment project depends entirely on the quality of their work. Digital technologies can significantly improve the quality of oilfield services and the TAGRAS holding has already become a vivid example of how this can be achieved in reality,” explained Rustam Kamalov, Deputy CEO Oil&Gas Solutions at the ITPS Group of Companies.

The conference participants highly appreciated the level of organization and relevance of the topics discussed. The issues were reviewed from different angles: oil industry workers, drillers, engineers, project managers, developers, representatives of municipal authorities and the IT industry all had a say. “It was an open discussion, all types of questions were asked, including the controversial ones and it was useful for both the Holding and the company as a whole,” said Anton Grachev, Director of the IT Park in the Republic of Tatarstan. According to him, integrated digitalization offered a number of competitive advantages to the companies and the only question was who would be the first to use them. TAGRAS Holding was one of the first to realize this. The representative of the IT park also encouraged the divisions of the Holding to take an active part in the Russian projects related to end-to-end technologies.

Head of the Almetyevsk municipal district Timur Nagumanov called digitalization an integral part of life and outlined the main focus of digital transformations in the city in the recent years. “We want digitalization to influence the lives of the people. For example, let’s take the implementation of a lighting control system – people should experience it. If they don’t witness the real improvements, then digitalization for the sake of the process is not interesting for us,” he emphasized. 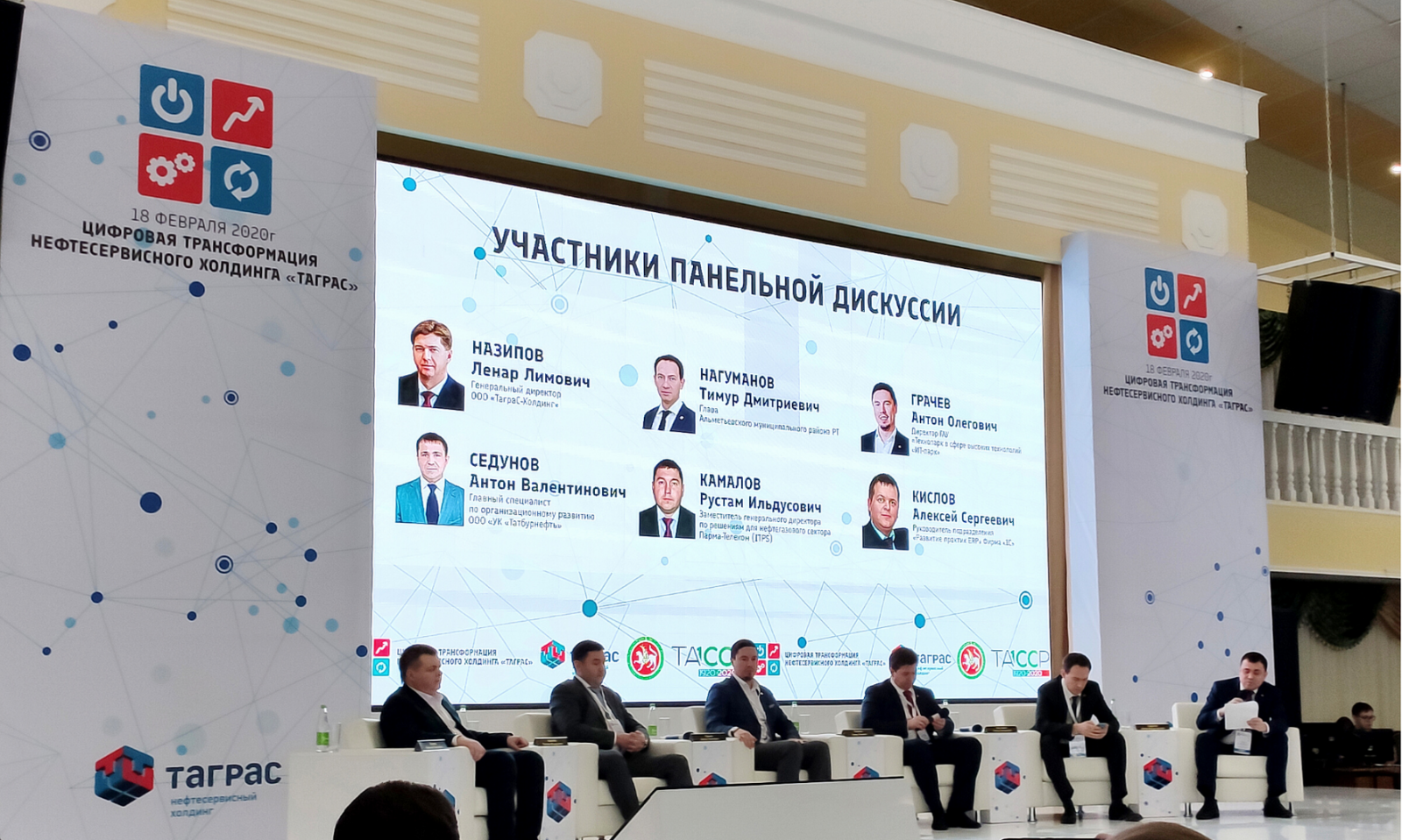